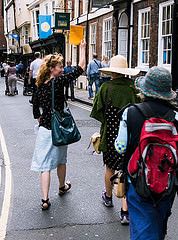 York Curiouser’s Co-Artistic Directors Hazel Colquhoun and Lara Goodband will guide you round In Between, the series of poems by John Wedgwood Clarke stencilled on the walls of York’s hidden passageways. In Between was originally installed in June 2014 to great acclaim. This year, York Curiouser has commissioned John Wedgwood Clarke to write a new poem to add to the collection, inspired by York’s Medieval stained glass. This walking tour forms part of York Curiouser’s research during 2015 and gives participants the opportunity to say what they would like York Curiouser 2016 to look like.

Hazel Colquhoun and Lara Goodband originated and curated York Curiouser which was installed around York from 14 June to 7 July 2014. They are independent art curators and arts consultants. Hazel specialises in public art commissioning, and works with contemporary artists in different spaces and places, away from the traditional arts venue. Lara is an independent art curator who specialises in artistic interventions and creative interpretations of museum collections, contemporary art exhibitions, and public art.