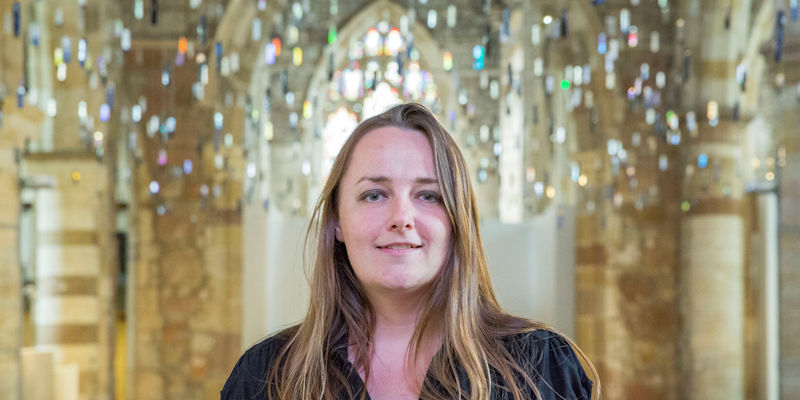 Created by international artist Alexandra Carr as part of York Festival of Ideas, the exhibition, Weight of Light, is inspired by theories of light by Newton and Goethe.

Alexandra works collaboratively with world-leading experts, including engineers, chemists and theoretical physicists, and focuses on the boundary between art and science.

She said: “Newton and Goethe both experienced the same phenomena through a different lens, coming to different conclusions. Through the interplay of colour, light and dark, I comment on how aspects of both theories are correct and that there is truth in every perspective.”

Supported by Arts Council England, the exhibition also includes video and drawings. Free to attend, it is open to the public from 10am to 4pm daily until Sunday 16 June.

The exhibition is closely linked to the Festival Focus Day The Poetry and Music of Science, which will bring together artists – including Alexandra - scientists, conductors, writers and musicians to explore the interfaces between science, literature, art, astronomy, poetry, music and mathematics.

Taking place on Sunday 16 June at the Tempest Anderson Hall, Yorkshire Museum, the day of talks is inspired by The Poetry of Music and Science, a new book by the University of York’s first Professor of Natural Philosophy, Tom McLeish.

Tom and Alexandra have worked together before, notably on a project with medieval scholars and scientists, inspiring art with scientific ideas from the 13th century. One example of Alexandra’s art from this project features on the front cover of The Poetry and Music of Science. Both the book and Focus Day point to the common territory between science and the arts, and challenge the assumption that science is less creative than art.

Tom McLeish said: “Both Alexandra’s inspiring exhibition and the Festival Focus Day itself aim to break the silence on the deep creativity and imagination required in science, and the connections between science and art.

“We invite people to come along and join in the discussion as we look at the connections between visual thinking in painting and science, the common ground between the art of the novel and scientific experimentation, and the links between abstract structures in music and mathematics.”

York Festival of Ideas runs from 4 June to 16 June and will present over 200 mostly free events under the banner of A World of Wonder.  Featuring world-class speakers, exhibitions, theatre, music, films, guided walks, family-friendly activities and more, the programme offers something for all ages and interests.

Other Festival Focus Days will explore issues including toleration, poverty and how to deliver a fair economy for all. Audiences will also have the chance to engage with in-depth discussions on the value of higher education to society, and the ability of artificial intelligence to improve lives. There’s also an opportunity to learn how cultural identity in France and Britain is expressed by food, fashion and feminism.

View the full programme at yorkfestivalofideas.com.