Owenvarragh: A Belfast circus on "The Star Factory" 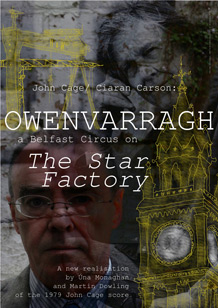 John Cage’s 1979 score provides "a means for translating a book into a performance without actors, a performance which is both literary and musical or one or the other." Using chance-determined poems from the text and combining a recitation of these with recordings of places and sounds in the book, along with live music, the score transforms the literary work into a "circus" of sound and words.

Cage first realised his score as Roaratorio, an Irish Circus on Finnegan's Wake which featured Cage reading Joyce along with traditional musicians Paddy Glackin, Seamus Ennis, Joe Heaney and others.

Úna Monaghan and Martin Dowling have now collaborated to bring Ciaran Carson's enigmatic memoir of Belfast to life in a similar way. Carson will read chance determined poems drawn from his novel, while sound recordings are projected in 3 dimensions. Live performances by Belfast based traditional musicians complete the circus. A historic event, Owenvarragh formed part of the celebrations to mark the 100th birthday of John Cage in 2012.

Úna Monaghan is a harp and concertina player, composer, and sound artist from Belfast. She also works as a sound engineer specialising in live sound for traditional music. She completed a degree in Astrophysics at Cambridge University, and a Masters in Sonic Arts at Queen’s University Belfast. Formerly the Studio Assistant in the Sonic Arts Research Centre in Queen’s, she is currently a PhD student working on technology in Irish traditional music performance. She was a finalist at the RTÉ / RAAP Breakthrough awards in 2011, at the Seán Ó Riada gold medal competition in 2012, and has been selected as a Future Music Performance Fellow at the Atlantic Music Festival in Maine in 2013.

Martin Dowling is Lecturer in Irish Traditional Music in Queen’s University of Belfast. He is a fiddle player who performs and teaches regularly in Ireland, continental Europe, and the U.S. He holds a PhD in History from the University of Wisconsin-Madison and has held research fellowships in history and sociology in Queen’s University of Belfast and University College Dublin. From 1998 to 2004 he was the Traditional Arts Officer in the Arts Council of Northern Ireland and is has been a teacher at Scoil Samhraidh Willy Clancy in County Clare since 1999. His publications on Irish history include Tenant Right and Agrarian Society in Ulster 1600-1870. He is currently completing a book for Ashgate Publishing Group entitled Stones in the Field: Traditional Music and Irish Society.

Ciaran Carson is Professor of Poetry and Director of the Seamus Heaney Centre for Poetry in Queen’s University of Belfast. He is the author of nine collections of poems, for which he has won numerous prizes including the T.S. Eliot Prize, the Irish Time Irish Literature Prize, and the Forward Prize. His prose works in addition to The Star Factory include Last Night’s Fun: A Book About Irish Traditional Music, Shamrock Tea, and The Pen Friend. He has also published translations of Brian Merriman’s Cúirt an Mhéan Oiche, the Old Irish Epic Táin Bó Cuailnge, and Dante’s Inferno. Formerly Literature and Traditional Arts Officer of the Arts Council of Northern Ireland, Ciaran is also a renowned traditional flute player.