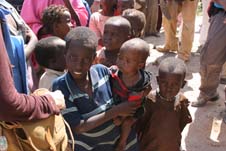 Children queue for food at a aid distribution centre in Mogadishu, Somalia, August 2011, by DFID (http://flic.kr/p/arv759) used under CC BY 2.0

What are the best business models to feed 10 billion people sustainably and equitably? Should we produce and eat less meat or should we develop genetically modified and stem-cell alternatives? What will that mean on a global scale? Population biologist Charles Godfrey will set the scene.

Focus Day: The Future of Food‌

This event is part of the Future of Food Focus Day. Pick and mix from a day-long series of talks where experts from a variety of areas discuss and explore the order and chaos of food sustainability.

Charles Godfrey is interested in population and community ecology, and in evolutionary biology. His lab explores questions in these fields using both theoretical and experimental approaches. They are making extensive use of the pea aphid as a model system to explore a variety of different problems in ecology and evolution. These include ecological speciation and the evolution of specialisation, the coevolution of host resistance and natural enemy counter-resistance, the role and dynamics of bacterial symbionts, and the importance of indirect population dynamic effects mediated by predators, parasitoids and pathogens.

Charles is interested in insects that vector human diseases, and how they may be controlled using modern genetic interventions, and the population genetics and population dynamics involved. He has also worked on theoretical problems in evolutionary biology: for example sex ratio, biological signalling and life history theory. Finally, he is interested in taxonomy: in general; with the transformation of the subject into modern biodiversity informatics; and in particular with the systematics of braconid wasps.

This event is part of the An Appetite for Food festival theme. Also in this theme: