Out of Grief, Dance; Out of Pain, Poetry: Greek Tragedy in the face of Chaos
Oliver Taplin 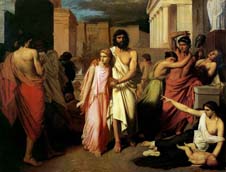 The tragedies of Sophocles still present an intense and unflinching vision of the human world amidst its pain, ‘the turbid ebb and flow of human misery’ (Matthew Arnold). At the same time they set up a complex and inextricable combination of strong emotion and challenging thought across a wide range of human experience in order to make some kind of sense of human suffering.

We see an unflinching confrontation with suffering, with the human condition in all its darker and more heart-rending aspects. No evasion, no palliative. Yet in the face of this somber fixity, Sophocles’ plays are never reduced to inarticulacy or chaos or despair. They remain strong and engaged amid the turbid ebb and flow; they find poetry and music and heat and light even in the most arctic conditions of human life. The most terrible possibilities are exposed and faced, and yet the response becomes breathtakingly crafted words and movements and song.

Join Oliver Taplin as he attempts to make good these big claims with the illustration of a great choral lyric in Oedipus the King. He will also try out his translation of it, forthcoming from Oxford World’s Classics.

Oliver Taplin retired in September 2008 from being a Professor of Classics at Oxford University and Tutorial Fellow at Magdalen College, Oxford. His first book was The Stagecraft of Aeschylus (OUP, 1977), and his most recent single-authored book is Pots and Plays (Getty Publications, 2007). He was elected to the British Academy in 1995, and was awarded an Honorary Doctorate by the University of Athens in 2013.

The leading recurrent theme of his work has been the reception of poetry and drama through performance and material culture, in both ancient and modern times. Recently he has been translating plays with the aim of including the kind of dynamic and colour which will be effective in live performance with verse and music. His Medea was published in spring 2013 (Chicago UP), and he has almost completed four tragedies of Sophocles for Oxford World’s Classics.

Throughout his career he has tried to keep one foot outside the academy, especially in broadcasting and theatre, both within and beyond the UK. Productions that he has collaborated with include the Ôresteia (1981-2, dir. Peter Hall), The Thebans (1992, dir. Adrian Noble), the Ôresteia (1999-2000, dir. Katie Mitchell) and Swallow Song (2004, 2006 dir, Lydia Koniordou).

Roman and Barbarian: Coin use, money and exchange 12 June 2014