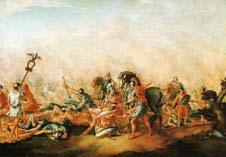 We all know that the Roman empire was one of the most successful and important civilisations the world has ever known. But we also know that it suffered some colossal disasters. Huge military defeats, such as the battle of Cannae when as many men fell as on the first day of the Somme; natural disasters like the eruption of Vesuvius, and the first appearance in Europe of the bubonic plague were just some of the calamities they suffered. And that's not to mention the many earthquakes, fires, floods and famines that regularly afflicted them.

These disasters stress-tested Roman society in a way that the good times never did. The result is that the Roman responses can tell us a great deal about how their society was ordered and what were its strengths and weaknesses. Roman Disasters illustrate how the resilience of the Roman political and cultural system allowed the Romans to survive the impact of these life-threatening events. It also shows that, once the empire had become Christian, narratives of these disasters began to play an important role in Christian thought and rhetoric.

Dr Jerry Toner is Fellow and Director of Studies in Classics at Churchill College, Cambridge. His most recent books are Roman Disasters (Polity Press, 2013) and Homer's Turk: How Classics Shaped Ideas of the East (Harvard University Press, 2013). He has recently finished a textbook for Johns Hopkins UP entitled The Day Commodus Killed a Rhino: Understanding the Roman Games, and has also collaborated with a Roman nobleman called Marcus Sidonius Falx to produce How to Manage Your Slaves.

Roman and Barbarian: Coin use, money and exchange 12 June 2014