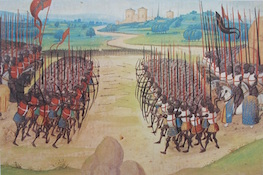 The 600th anniversary of the battle of Agincourt falls on 25 October 2015. The battle is popularly perceived as the victory of Henry V’s a hugely outnumbered English army against the might of French chivalry. Thanks to Shakespeare, and Olivier, we have all ‘heard’ Henry V’s rousing battle speech. Professor Anne Curry, Professor of Medieval History at the University of Southampton, has gone back to the contemporary sources, many of them unpublished, to reveal what the armies were like, and more crucially, how many soldiers they contained. Through her talk you will follow in the steps of Henry V, from his decision to go to war, his hopes of avoiding battle, his astute generalship on the day, to his return to London in triumph. Her talk will examine what went wrong for the French and why the longbow proved so lethal. But Agincourt has also generated many myths over the centuries. Professor Curry will also reveal what Agincourt has meant from the fifteenth century to the present day and will debate how we can separate  historical truth from legend.

Anne Curry is a professor of Medieval History and the Dean of the Faculty of Humanities, University of Southampton. In the past, she has been the president of the Historical Association, and is the author of The Battle of Agincourt Sources and Interpretations; Agincourt. A New History; Great Battles. Agincourt; and Henry V in the Penguin Monarchs series.

This event is part of the Culture and Identity festival theme. Also in this theme: