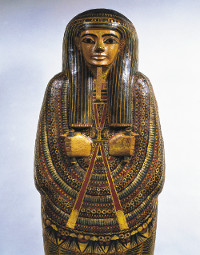 Due to popular demand, this event is now sold out. You may get in on the door on the night; any free seats will be made available on a first-come-first-served basis.

Professor Joann Fletcher of the University of York’s Department of Archaeology reveals some of the new discoveries and hidden secrets uncovered during her work as part of the University’s ‘Mummy Research Group’.

Joann obtained her first degree in Ancient History and Egyptology from University College London in 1987, followed by a PhD entitled ‘Ancient Egyptian Hair: a study in style, form and function’ which she received from the University of Manchester in 1996.

As Honorary Research Fellow at the University of York she teaches ancient Egyptian funerary archaeology as part of the archaeology degree course, and designed the first nationally available GCSE-equivalent (Level 2) qualification in Egyptology on behalf of the educational body Centra.

Augustus: From Revolutionary to Emperor 12 June 2015