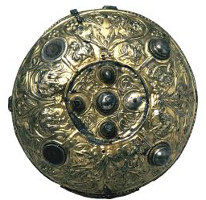 All galleries are fully accessible but the reading room and historic library are not accessible to wheelchairs. Please contact us on 01904 697979 if you wish to access these facilities and we will do our best to help you.

A very special chance to discover the story of this Anglian ecclesiastical bowl, which became a Viking drinking vessel.  The Ormside Bowl is one of the most celebrated treasures of the Yorkshire Museum and there is opportunity to see it up close, and handle Anglian and Viking artefacts from the Museum’s collections.