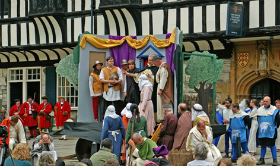 York’s multi-pageant Creation to Domesday cycle for the feast of Corpus Christi – popularly the York mystery plays – is first noticed early in the reign of Richard II. It lasted almost two centuries until its effective suppression by the then Dean of York following its last performance in 1569. The cycle represented a significant devotional and cultural phenomenon, but also a major medieval tourist attraction. Its nature and meaning was not fixed from the time of its first notice and the changing relationship between the crafts that performed the cycle and the city governors who increasingly came to control it is an important part of the story. The lecture will consider in particular the origins of the cycle, the role of crafts and groups of artisans and traders in relation to individual pageants, and questions to do with the nature of the production. It will ask to what degree spoken text was part of performance before the 1470s and will explore issues relating to performance, in particular how far women were excluded from or included in productions. Finally it will offer some thoughts about the last years of the cycle and its demise before its revival in the modern era.

This event is part of the York: Pathways to the Past festival theme. Also in this theme: