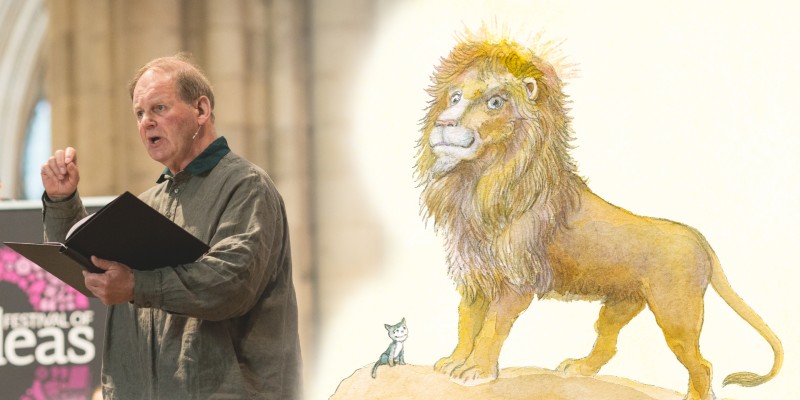 Performance
This event has now finished.

We are excited to welcome back one of the country’s most celebrated children’s authors. Together with actress Natalie Walter and cellist Clare O’Connell, Michael will perform a concert around his most recent book, Carnival of the Animals, a collection of poems in collaboration with iconic artist Michael Foreman. It was inspired by the humorous music of French composer Camille Saint-Saëns, but Michael has added many more animals, who speak in their own voices, full of humour and energy, to tell of their lives and the impact of humanity on their habitats.

Music will include extracts from Carnival of the Animals and other pieces which reflect the animals.

Come along for an unforgettable performance in celebration of the natural world.

You can buy copies of many of our speakers’ books from Fox Lane Books, a local independent bookseller and Festival partner. In some cases, author signed bookplates are available too.

Michael Morpurgo, OBE, FRSL, FKC is one of the UK’s best-loved authors and storytellers. He was Children’s Laureate from 2003 to 2005 and has written over 130 books, including The Butterfly Lion, Kensuke’s Kingdom, Why the Whales Came, The Mozart Question, Shadow, and War Horse. War Horse was adapted for a hugely successful stage production by the National Theatre and for a film directed by Steven Spielberg. His book Private Peaceful was adapted for the stage by Simon Reade and made into a film, directed by Pat O’Connor. In 2006, Michael was awarded the OBE in 2007 and Knighthood in the New Year's Honours in 2018 for services to literature and charity.

Performer, arranger and curator, cellist Clare O’Connell plays as a soloist and chamber musician. Since founding Behind The Mirror, her concert series based in Berkhamsted, Clare’s practise has developed into a mixture of performing, writing, arranging and curating projects in which she collaborates with musicians and artists who inspire her. She is most interested in the intent behind a piece of music and finding the perfect context in which to present it. She commissions many new works from living composers, makes her own arrangements of a vast array of music for unusual groups of instruments, and interweaves music poetry and storytelling to add another dimension to the listening experience. Over the first lockdown she arranged, recorded and produced her debut solo album The Isolated Cellist,  a deeply personal collection of ancient and modern music for solo and layered cello which was released by Stone Records in April 2021. Clare is a member of visionary ensemble Lontano and the Storytellers Ensemble and is a regular collaborator with many other chamber music & chamber opera projects. She is a graduate of Wadham College, Oxford where she studied Ancient and Modern History followed by postgraduate study at the Royal College of Music and the Hochshule für Künste in Bremen, Germany, with internationally acclaimed cellist and teacher Alexander Baillie. She plays on a cello by Stefan Krattenmacher.

Find out more about Clare online

Natalie Walter is a British actress and writer. She has worked extensively in theatre, TV, film and radio with directors including Sam Mendes, Greg Doran and Sir Peter Hall. Theatre credits include: A Little Hotel On The Side, As You Like It (Peter Hall Company) for Theatre Royal Bath; The 39 Steps for The Criterion Theatre, West End, A Midsummer Night’s Dream and Love’s Labour’s Lost for The Royal Shakespeare Company and Novello Theatre, West End, and many more. Television credits include a variety of programmes on the BBC including Doctor Who. She also appeared in many films - for example, You Will Meet a Tall Dark Stranger, The Honey Trap and Lady Godiva. Her radio credits include a number of programmes on BBC Radio 4. Natalie has performed several times with Sir Michael Morpurgo. She played The Pied Piper at the Royal Festival Hall with the London Philharmonic Orchestra in Michael’s The Pied Piper Of Hamelin. Other performances include Pippa in Where My Wellies Take Me.