Home>Calendar of events>CITIZENS: Why the key to fixing everything is all of us 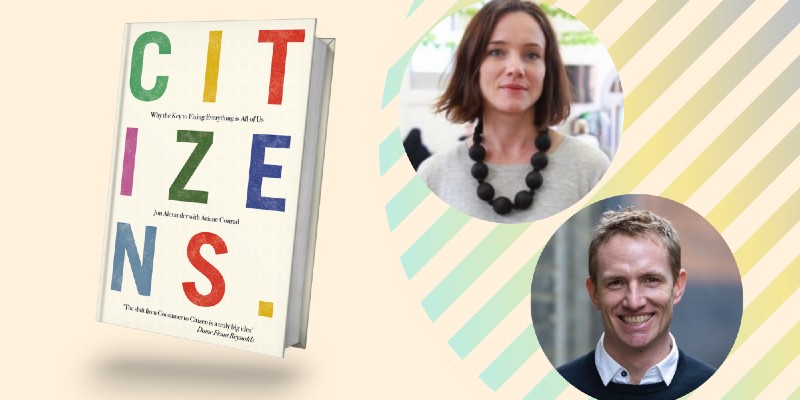 CITIZENS: Why the key to fixing everything is all of us Jon Alexander in conversation with Sophia Parker

The headlines of our time are enough to make anyone feel helpless. But when we start to think and act like Citizens, not just Consumers, everything changes.

In his book, CITIZENS: Why the Key to Fixing Everything is All of Us (co-authored with Ariane Conrad), activist and strategist Jon Alexander argues that the ‘Consumer Story’ that has dominated society and all of its institutions for the last eight decades is in collapse; in its place, the ‘Citizen Story’ is rising in every aspect of society, from politics to business.

Join Jon, in conversation with Sophia Parker, Director of Emerging Futures at the Joseph Rowntree Foundation, as they discuss what we need to do to step into a bigger idea of ourselves: as collaborative, caring, creative Citizens who can shape our communities, organisations and nations for the better.

Jon Alexander is co-founder of the New Citizenship Project (NCP), a strategy and innovation consultancy that aims to shift the dominant story of the individual in society from consumer to citizen. NCP’s client list includes the Guardian, the European Central Bank, and the European Journalism Centre. Having begun his career with a decade in the advertising industry at agencies including BBDO and Fallon, Jon is a proud former winner of Brand Republic’s Big Idea of the Year Award, which he received for creating the concept of MyFarm in 2011: handing over decision making on a real working farm to the public by online vote and debate as a way of engaging people with sustainable food production. Jon holds three master’s degrees in disciplines spanning humanities and business. He has won several essay awards including the inaugural Ashridge/European Academy of Business in Society Sustainable Innovation Award and the Young Foundation’s Beyond Meritocracy Prize, and was a major contributor to the 2018 bestseller New Power (shortlisted for Financial Times Book of the Year 2018, by Jeremy Heimans and Henry Timms). Along the way, Jon has also represented Great Britain in two different sports. His recently published work, Citizens: Why the Key to Fixing Everything is All of Us, was described by artist and philosopher Brian Eno as a ‘vitally important book’, and has been endorsed by academics and practitioners from across sectors.

Connect with Jon and NCP online:

Sophia Parker leads a major new programme of work at Joseph Rowntree Foundation (JRF), to imagine and grow radical new approaches to tackling poverty, in collaboration with JRF’s partners and people with lived experience of poverty. Sophia was formerly CEO of Little Village, a London-based charity founded in 2016 to fight child poverty. Previously, Sophia has held senior roles at think tanks including the Resolution Foundation and Demos. As well as roles in central government, Sophia has been a Fellow at Harvard’s Kennedy School and set up Kent’s pioneering Innovation Lab. Sophia brings a track record in policy, research and designing community-based solutions to social challenges. She is based in York.

Connect with Sophia and JRF online: