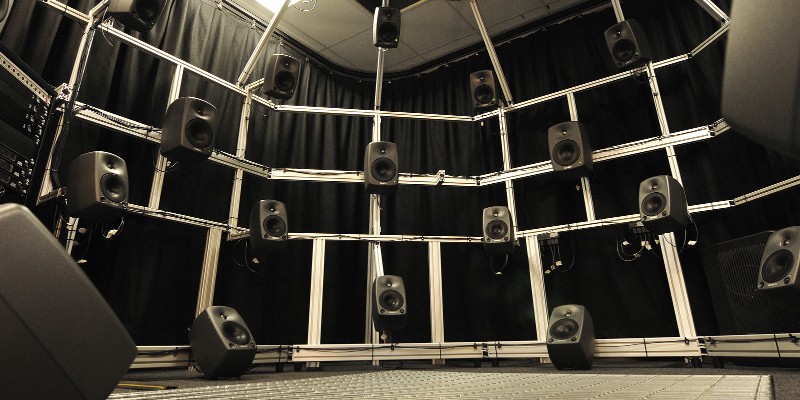 Accessibility to film and television for visually impaired audiences has been traditionally provided through a method called Audio Description (AD). AD is a third person commentary which is added to a film and television production to describe the visual layer.

However, the addition of a sound element external to the sound design of a production often results in overlaps with key elements of the soundtrack, such as music and sound effects.

What if we could integrate accessibility to a creative production by harnessing the power of sound design?

The Enhanced Audio Description (EAD) methods are an alternative to Audio Description, in which a combination of sound effects, audio spatialisation and first-person narration is used to create accessible experiences.

Join Mariana López and Gavin Kearney to discover the core principles of the EAD methods and to experience cutting-edge examples of EAD.

Dr Mariana López is a Senior Lecturer in Sound Production and Post Production at the Department of Theatre, Film, Television and Interactive Media at University of York, where she has been working since 2016. She has a background in music, sound design and acoustics. Mariana is the Principal Investigator for the Arts and Humanities Research Council (AHRC) funded project ‘Enhancing Audio Description II: Implementing accessible, personalised and inclusive film and television experiences for visually impaired audiences’. She was also the Principal Investigator for Enhancing Audio Description, also funded by the AHRC (2016-2018), and the British Academy funded project ‘The Soundscapes of the York Mystery Plays’. She has also supervised Marie Skłodowska-Curie Fellowships throughout the years, with topics including gaming and education, acoustical heritage studies, and natural acoustics. Mariana is also active in the field of sound design, having worked on a number of creative experiences.

Dr Gavin Kearney graduated from Dublin Institute of Technology in 2002 with an honours degree in Electronic Engineering and has since obtained both MSc and PhD degrees in Audio Signal Processing from Trinity College Dublin. During this time he worked (and continues to work) in the audio industry as sound engineer and producer. After his PhD, he spent time as a postdoctoral research fellow in game audio on the Science Foundation Ireland ‘Metropolis’ project, whilst lecturing on the Interactive Digital Systems and Music and Media Technology courses at Trinity College. He first joined the University of York as a Lecturer in Sound Design at the Department of Theatre, Film and Television in January 2011 and has since been appointed as Associate Professor in Audio and Music Technology at the Department of Electronics. He has over 100 publications and patents relating to immersive sound to his name, many in collaboration with industry partners such as Abbey Road Studios, BBC, Google, Huawei and Mercedes-Benz Grand Prix.

Find out more about Theatre, Film, Television and Interactive Media at the University of York