Art out of crisis: A play from the Theresienstadt Ghetto
Speakers: Lisa Peschel and Dorothy Elias 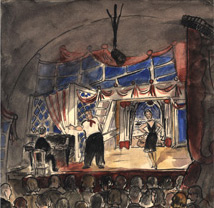 Please note: Free parking is available on the afternoon of the event in the small car park between Baird Lane and Freboys Lane (a five-minute walk north of TFTV) and in the Field Lane Car Park (a ten-minute walk northeast of TFTV). Please see the map link above.

The UK premiere of The Smoke of Home, a play written in the World War II Jewish Ghetto at Theresienstadt, forms the centerpiece of an afternoon of engagement with the question: in times of crisis, why do some societies respond with art?

Researchers will explore cultural responses to crisis, ranging from theatre in times of war and dictatorship to community arts practices in impoverished neighborhoods in the UK. Featuring Cariad Astles (Associate Lecturer, University of Exeter, Lecturer, Royal Central School of Speech and Drama, and Director, Centre of Research into Objects and Puppets in Performance), Lisa Peschel (Lecturer at the University of York and editor of the anthology Performing Captivity, Performing Escape: Cabarets and Plays from the Terezin/Theresienstadt Ghetto) and Kerrie Schaefer (Senior Lecturer, University of Exeter, and co-investigator on 'Remaking Society', an interdisciplinary AHRC Connected Communities project exploring the ways in which participatory cultural practices generate social relations for communities that are suffering significant hardship and economic deprivation), moderated by Michael Berkowitz (UCL, Professor of Modern Jewish History).

Following the panel will be the first fully staged UK performance of The Smoke of Home, a recently rediscovered one-act play that Theresienstadt prisoners wrote in response to their captivity. With this suspenseful historical allegory set in the Thirty Year's War, the play's two young authors confronted a question their fellow prisoners could not bear to face: if we survive, will we have a home to return to? Directed by Joe Lichtenstein, produced by Beth Sherburn, featuring student and professional actors Andrina Carroll, Leigh Douglas, Sophie Mann, Rob Pickavance and Sam Thorpe Spinks.

The discussion will feature Dorothy Elias, translator of the play and daughter of the surviving author.

Please join us for a drinks reception after the discussion.

Event Registration Online for Art out of crisis; A play from a Jewish ghetto powered by Eventbrite

Tales of South and North: Understanding the Battle of Jutland and its preludes in World War I 25 June 2013