Theatre of War: Whose side are you on?
Helen Cadbury and Matt Midgley 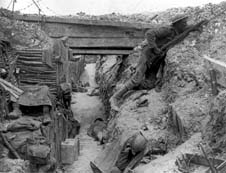 Two playwrights: one Quaker, one ex-soldier. Why are we so drawn to writing about war?

Two University of York PhD playwrights explore their political response to the First World War through the people who lived through it.

In Helen Cadbury’s new play Shattered Songs we see World War One and the Russian Revolution through the eyes of a Red Cross nurse, who is writing up her memoir 60 years later, in a Britain now rocked by IRA bombs.

Matt Midgley’s new play, The Uncivilised Warfare of Zeppelins, explores some of the forgotten battles of the First World War: snapshots of life in York during wartime are intertwined with and implicated in the experiences of several conscientious objectors, as they take their own journey to war-torn France.

In both plays, questions of democracy, capitalism and privilege are raised that remain relevant today.

Through excerpts of performance and a panel discussion with both playwrights, notions of the individual versus the collective and how we approach history, aware of our own political bias, will be examined before the event opens up into an audience-led Q&A.

This event is part of the The War That Changed Our World festival theme. Also in this theme: