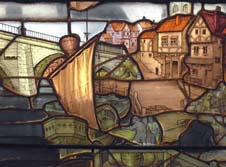 James Evans explores the background to the great and daring English voyage of discovery launched in 1553.
The voyage was both an extraordinary adventure story, for which remarkable evidence survives (including the captain’s log detailing what became of those who became lost and fatally stranded in the Arctic ice), and at the same time a vital forerunner for much that came afterwards.
One ship - captained by a remarkable man who deserves to be better known - succeeded in making it not to China but to Russia. Its men visited a great imperial court, even if it was not the one they had had in mind. And they returned to London to recount their story. In the aftermath a trading company was established: the first of the great chartered companies and the forerunner of many which are better known. And England was changed in a manner which has affected us ever since.

James Evans did a degree as well as a PhD in history at Oxford University before working in television as a producer of historical documentaries. Merchant Adventurers is his first book for the popular history market.