York: The Making of a City 1068-1350
Sarah Rees-Jones, Department of History and Centre for Medieval Studies, University of York 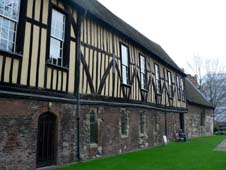 York was one of the most important cities in medieval England. In this talk, Sarah Rees-Jones will explore the impact of the Norman Conquest on its development. In particular it will focus on the consequences of the development of new styles of government that contributed to the commercial growth of the city and the emergence of a dominant mercantile civic community in the decades around 1300 during the period of the Scottish Wars of Independence. These developments provide a new historical context for understanding the later medieval landscape of the city, and the lecture will focus in particular on the context out of which the impetus developed for the construction of Holy Trinity Hall (now known as the Merchant Adventurers Hall) in 1357.

Sarah Rees Jones is a member of the Department of History and a former co-director of the Centre for Medieval Studies at the University of York. She is currently Director of the Institute for the Public Understanding of the Past there. She is also a Fellow of the Society of Antiquaries, a fellow of the Royal Historical Society, a member of the York Archaeological Trust and of the Historic Towns Trust UK.

Event registration for York: The making of a city 1068-1350 powered by Eventbrite