All Aboard the Cloud Lab: Crossing America in an airship 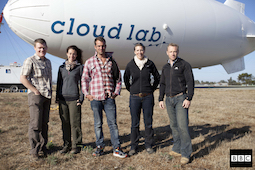 Filmed during a four-week journey across the United States, the BBC’s Operation Cloud Lab delved into a diverse cross section of atmospheric phenomena.

Starting from warm waters of Florida’s Atlantic seaboard the team headed north up towards the panhandle and into Alabama. Along the way they performed the first ever experiment to weigh a cloud, and the results were quite astounding.

As their voyage continued they stopped off in New Orleans to survey the destruction caused by Hurricane Katrina and they investigated the possible link between pollution and hurricanes. Somewhat ironically, a period of storms and bad weather held up progress in Texas. This impromptu delay did provide the opportunity for them to investigate how bacteria can produce clouds.

Leaving the moist skies behind, they then reached the arid high plains east of the Rockies and visited Phoenix, a city which literally has re-engineered its climate as it has expanded over the last few decades. Finally the airship battled against the Pacific air currents that are funnelled through the San Gorgonio Pass which was their only way through the Rockies to the Pacific where they encountered migrating whales which benefit from upwelling currents driven by the cold north-westerly winds.

Dr Jim McQuaid is an atmospheric scientist from the University of Leeds, normally his research finds him on board research aircraft, but as part of the Operation Cloud Lab team he took to the skies at a much more leisurely pace.

Event management for All Aboard the Cloud Lab powered by Eventbrite