Turner, Ruskin, and the Pre-Raphaelites on Screen 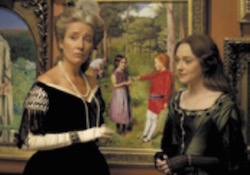 JMW Turner, the artists of the Pre-Raphaelite Brotherhood, their families and friends seem endlessly fascinating to the public as well as to artists, curators, and historians. Two films released in the past year, Effie Gray and Mr Turner, feature these artists and the artworld intrigues that surrounded them. Both films juxtapose the dramatic private lives of artists with scenes of the public display of their works - including the controversial first exhibitions of the Pre-Raphaelites.

The two films also feature some of the same characters: the critic John Ruskin, President of the Royal Academy Sir Charles Eastlake, and Pre-Raphaelite artist John Everett Millais, among others. Effie Gray, the wife first of Ruskin, then of Millais, and Lady Eastlake, the wife of Sir Charles, represent some of the women involved in these artistic circles.

Join Susanna Avery-Quash from the National Gallery, Julie Sheldon of Liverpool John Moores University, and Suzanne Fagence Cooper, author of Effie Gray: The Passionate Lives of Effie Gray, Ruskin and Millais, as they explore how artists and artworlds of the 19th-century are presented to the audiences of today.

Event Registration Online for Turner, Ruskin, and the Pre-Raphaelites on Screen powered by Eventbrite