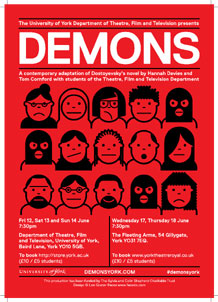 The Department of Theatre, Film and Television presents

A contemporary adaptation of Dostoyevsky’s novel by Hannah Davies and Tom Cornford with students from TFTV in association with Common Ground Theatre and The Fleeting Arms.

Demons explores a small group of activists as they begin to grow. They are determined to fight the grotesque inequalities that surround them. But how can they change them and how far should they go? This production relocates Dostoyevsky’s story to the present day and asks what we should be prepared to do to make a new world.

What are you prepared to do to change the world? What would you damage? Who would you destroy?

Fyodor Dostoyevsky’s 1872 novel Demons explores a society in which the poor and powerless are governed by a tiny number of the super-rich. The young are disenfranchised and the old are secure and complacent. This contemporary adaptation relocates Dostoyevsky’s story to the present day and asks what we should be prepared to do to make a new world.

This production will be the fifth annual summer production since the Department of Theatre, Film and Television moved to its new facilities on Heslington East Campus in September 2010.

Production funded by The Sylvia and Colin Shepherd Charitable Trust

This event is part of the Performance festival theme. Also in this theme: