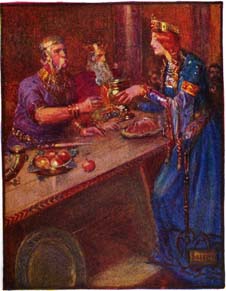 Beer and poetry often went together in Anglo-Saxon England, and the hall was celebrated as the place of community and creativity. Come and join us in the beorsele or beer-hall of the Duke of York pub, for our annual evening of Anglo-Saxon beer and poetry.

A retinue of reciters, led by Matthew Townend of the University of York, will perform a selection of Anglo-Saxon and Norse poetry, both in translation and in the original. There’ll also be an opportunity to try some Eoforwic Ale, a beer brewed specially for York Festival of Ideas by the Leeds Brewery.

In keeping with the Festival’s theme, this year we will be exploring a range of poetry on the subject of the strange and fantastic.

Using an authentic Anglo-Saxon recipe, Leeds Brewery prepares a special beer – Eoforwic Ale – for York Festival of Ideas. It will be on sale throughout the Festival at the Duke of York pub on King’s Square, including at the Beer and Beowulf event.