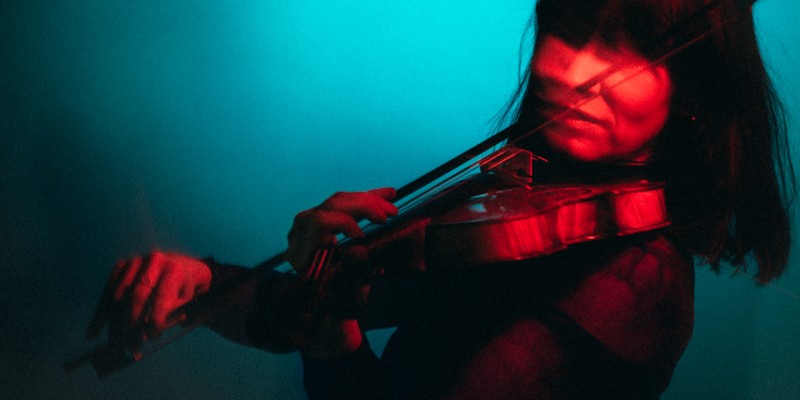 Our launch event brings together a dazzling array of international musicians, writers and poets to celebrate the energy and empathy of women's creativity.

The centre-piece is a specially commissioned performance by acclaimed violinist and composer Anna Phoebe, signifying a symbol of hope as nations start to consider the implications of a post-Covid world. Filmed in the magnificent York Minster, the performance powerfully weaves together original music and contributions of poetry from an array of South Asian and British writers to create a mesmerising tapestry.

The event, which includes a panel discussion, has been co-curated through our partnership with amazing international festivals in India and Bangladesh, and by Anna Phoebe and poet Salena Godden. All have come together through a shared and passionate belief in the power of ideas and collaboration.

Join us, as through this unique partnership, we celebrate women's voices, their imagination and their creativity. We hope you will be inspired to gain new insight and understanding of different cultural experiences and creators.

Please be aware: This event covers subjects including rape and other violence against women which viewers may find distressing.

This event is hosted live on Zoom Webinar and you’ll receive a link to join a couple of days before it takes place. During the event, you can ask questions via a Q&A function but audience cameras and microphones will remain muted throughout.

York Minster is one of the world’s most magnificent cathedrals. Since the 7th century, the Minster has been at the centre of Christianity in the north of England and today remains a thriving church rooted in the daily offering of worship and prayer.

The Minster is open for worship and is also livestreaming many services. In addition, you are welcome to join the Minster Community on Zoom. More details here.

About the performers and speakers

Salena Godden is a poet, author, activist, broadcaster, essayist and memoirist whose work has been widely anthologised. She has had several volumes of poetry published including most recently Pessimism is for Lightweights (Rough Trade Books) and a literary childhood memoir, Springfield Road (Unbound). Her poem Pessimism is for Lightweights was donated to The Peoples History Museum, Manchester, where it is now on permanent display - The work was unveiled in February 2020 to mark the museum's 10th birthday. Salena has recorded several albums, most recently her spoken-word album LIVEwire (Nymphs and Thugs) which was shortlisted for the Ted Hughes Award in 2017. Canongate pre-empted world rights to her debut novel Mrs Death Misses Death, described by the publisher as an “electrifying genre- and form-defying firestarter.” and by Alan Moore "as profound as Cohen and playful as Brautigan." This debut was published in January 2021.

Jasmin Kaur is a writer, illustrator and poet living on unceded Sto:lo territory. Her writing, which explores themes of feminism, womanhood, social justice and love, acts as a means of healing and reclaiming identity. As a spoken word artist and creative writing facilitator, she has toured across North America, the UK and Australia to connect with youth through the power of artistic expression. Named a "rising star" by Vogue Magazine, and a "Writer to Watch" by CBC Books, her work has been celebrated at the American Music Awards by musical icon Jennifer Lopez and shared by celebrities like Tessa Mae Thompson and Reese Witherspoon. Her work includes her debut poetry and prose collection, When You Ask Me Where I’m Going (2019) and her sophomore novel, If I Tell You The Truth. You can find Jasmin on Instagram at @jusmun.

​J.A. Mensah is a prose and theatre writer and a lecturer in English and Creative Writing at the University of York. She was a Leverhulme Artist in Residence and her plays have been produced by Pilot Theatre in York and Live Theatre in Newcastle, among others. Her short stories are published or forthcoming in edited collections by Comma Press (The Book of Newcastle, 2020), New Writing North (New Narratives for the North East, 2021), and Dead Ink (Test Signal, 2021). Her debut novel, Castles from Cobwebs, won the inaugural NorthBound Book Award and was longlisted for the Desmond Elliott Prize.

Anna Phoebe is a violinist and composer working on cross-genre collaborative projects. Collaborations include the European Space Agency, writing music to Earth Observation data tracking climate crisis, and Cancer and Alzheimer’s research at the University of Kent, writing a choral and ensemble work responding to research images. Anna’s solo work is played regularly on BBC 6 Music, BBC Radio 3 and Scala Radio. She released ICONS in March 2021 and will release her solo album Horizons inspired by the sea later this year. Her instrumental duo AVAWAVES is signed to One Little Independent Records (home to Bjork and Skunk Anansie). Anna co-wrote with Ivor Novello Lifetime Achievement recipient Nitin Sawhney CBE, for his album released in March 2021 on Sony Masterworks, and she recently recorded with legendary musician and TV personality Jools Holland for his upcoming solo album on Warner Music. Anna presents a bi-weekly show Between Sea & Sky on Soho Radio. She features in Yasmin Alibhai-Brown's book Ladies Who Punch.

Sadaf Saaz is a poet, writer, entrepreneur, molecular biologist and women’s rights advocate.   She is a festival director and producer of Dhaka Lit Fest, which she co-founded in 2011.  She runs an arts and content production company, and The Junction, a performance space in Dhaka. She has been in the textile business for many years, and has recently started a clinical research and biotech company. She’s a member of the Bangladeshi women’s activist organisation Naripokkho, and has done research, critiques, advocacy and activism in the areas of violence against women, women’s political participation, women’s legal rights, women’s health and reproductive rights and sexuality. Sadaf is the author of a written and oral collection of poems Sari Reams. Her monologues based on Bangladeshi women’s stories Je Kotha Jai Na Bola (That which cannot be said), have been performed in various locations in Bangladesh, and she has recited her poetry in festivals in India, Bangladesh, Pakistan, Australia, Germany and the UK.  She is currently working on a novel.

Helen Smith is Professor of Renaissance Literature and Head of the Department of English and Related Literature at the University of York. She is currently writing a book exploring the liveliness of matter and its dramatic and poetic expression in the 16th and 17th centuries.

Bryony Aitchison is a poet and PhD student specialising in modernist poetry based in York, UK. She grew up on the South Coast of Cornwall, among the sea-battered cliffs that have inspired her poetry’s focus on the natural world. Bryony’s visually energetic compositions aim to explore the effect of natural and man-made environments on the body, as well as the impact of human agency on the environment.

Nay Assassa moved to York from Cairo for her undergraduate degree in English Literature, and quickly found herself not only in two minds but in a way in two bodies. The ways in which she moved around these two starkly different cities had seemed to her a sort of symbol for how different her life was in each. So it is this movement of shuttling back and forth, drifting in and out of these differing lifestyles that has come to inform her writing. In ‘Persian Rugs’ memory comes in to play, the comfort of being able to reimagine and reanimate movement as you experience change.

Chloe D’Arcy is an Irish poet educated in the UK. Her work is influenced by contemporary death culture, chronic illness, and social issues. She is an MA student at the University of York. You can find some of her work at honeyedpaper.com

Melizarani T Selva is a Malaysian writer and spoken word poet, with notable performances at the Jaipur Literature Festival, Commonwealth Peoples Forum and TEDxGateway. Her first book, Taboo, is a poetic exploration of her Masters thesis on the constructs and representations of the Malaysian Indian identity. Her poems have been translated in French and Bahasa Malaysia. She co-founded If Walls Could Talk - Poetry Open Mic and co-published an anthology of 100 poems by 61 poets from Malaysia titled When I Say Spoken, You Say Word!. Presently, she serves as co-editor of the Singapore-based literary journal singpowrimo.com