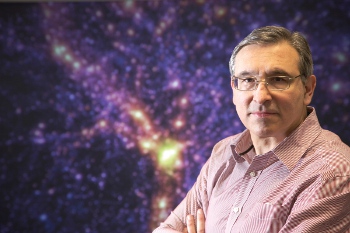 Speakers at this year’s Festival include leading novelists, artists and academics in a rich collection of talks, readings, and conversations.

The internationally renowned cosmologist Professor Carlos Frenk will open the Festival with a bang, exploring the big bang and how cosmology confronts some of the most fundamental questions in the world of science.

Anthony Horowitz, best selling author and prolific screenwriter, will talk about his life and work on 16 June at the University of York.

Sculptor Jane McAdam Freud, daughter of the late Lucian Freud and great-granddaughter of Sigmund Freud, talks of her solo exhibition Flesh & Stone at the Old School House Gallery on 16 June.

The Romans who shaped Britain

Roman Britain was created not by impersonal historical forces, but by men and women, each driven by ambition, aspiration and passion. The lecture explores the narrative of Britannia through the lives of its emperors, commanders, governors, officials and rebels.

A discussion on regeneration projects with particular reference to the recent King's Cross regeneration.

Author of the Horrible Science series, Nick Arnold, talks about his life and work

The wonder of home? Which places have it and what can architecture contribute?

A panel of experts will debate the question: The wonder of home? Which places have it and what can architecture contribute?.

A provocative and brilliant examination of what inspires great architecture and how buildings can change your life.

Interview and reading from her new work

Meet the Scientists ... who mummified Alan

In this Meet the Scientist event, members of the public will have an opportunity to meet the scientists behind the Channel 4’s award-winning documentary Mummifying Alan: Egypt’s Last Secret.

Capital - John Lanchester in interview with Will Gompertz

Author John Lanchester in conversation with Will Gompertz (BBC)

Mike Jay speaks about his book, High Society, tracing how today’s illicit substances have come to play such a simultaneously fetishized and demonized role in the modern world

Structural crisis of the capitalist world-system: How serious? How long? Endpoint?

To be a cat

The City of London

Never again? Lessons and legacies of the financial crisis

The changing face of public relations

The Mind of the Fraudster

The perils and potential of an ageing society, with Julia Unwin, Joseph Rowntree Foundation

Three survivors. One flat. Lots of zombies. Screening of the Zomblogalypse feature film

You're looking very well: The surprising nature of getting old

Lewis Wolpert, acclaimed scientist and broadcaster, investigates a topic close to all our hearts - why must we age and how should we cope with our physical decline?

The Antidote: Happiness for People Who Can't Stand Positive Thinking

Oliver Burkeman talks on his book The Antidote: Happiness for People Who Can't Stand Positive Thinking

The inner secrets of the universe

The search for the lost emperor Ashoka

Word Power: Speaking against death in the Arabian Nights

The last of three sessions with Geoff Wall in conversation with new writers: Kathleen McMahon, Essie Fox and Sophie Coulombeau.

Readings and conversation with authors Adharanand Finn and Oliver Balch

The science of love and betrayal

My Big Cats Journal and other adventures

How to Fly a Plane!

Author, Nick Barnard explores how to fly a plane

Walking the ancient landscapes of Britain

I Am Tim screening

William and Helen Bynum give an account of the evolution of medical knowledge and practice from ancient Egypt, India and China to today’s latest technology

Global and local transformation: The impact of conflict abroad and at home

Robert Douglas-Fairhurst and John Bowen discuss the popularity of Dickens.

A reading by historian and author Alison Weir

The historian and novelist, Alison Weir, will read from her new novel, Mary Boleyn, The Great and Infamous Whore/Mary Boleyn: The Mistress of Kings.

Sculptor Jane McAdam Freud talks about the inspiration behind her sculpture at her exhibition in the New School House Gallery.

Author, Anthony Horowitz, will discuss his writing in conversation with the University of York's Director of the Humanities Research Centre, Professor Judith Buchanan.

A hands on masterclass, hosted by alumna Denise O’Donoghue (Managing Director at ITV Studios) and special guests in the Department of Theatre, Film and Television.

Hosted by the University of York Debating Society, get your views heard debate one of this year’s most discussed topics.

The wonders of social media

The social value of public organisations

Where it all began: The Big Bang

Professor Carlos Frenk will open this year's York Festival of Ideas with a talk on the biggest metamorphosis of all - that of the universe as a whole, from the simplicity of the Big Bang to the complexity of the universe of galaxies, stars, and the planet on which we live.

Then and now: Viewing the transatlantic slave trade over forty years

In this lecture, Professor James Walvin will explain how our understanding of the Transatlantic slave trade has undergone a remarkable change over the last forty years in response to political and cultural transformations in Western society.